You might see some of these phenomena at the seaside. Most have natural causes and are not the result of pollution.

If you are in any doubt about whether or not it is pollution, report what you see at the pollution hotline on 0800 80 70 60

This can be a common occurrence in harbours and on beaches, particularly when there is a spell of warm weather, and a gentle onshore breeze.

The warm weather encourages the growth of marine algae, which are usually dispersed by waves and tide. If the sea is calm then there can be significant growth of algae, which can be blown towards the coast. The action of waves can whip the dead algae up and form a foam, often seen during stormy weather.

It can also be because some types of seaweed continually shed cells from their surfaces, and they are usually consumed in the marine systems. However, where these cells accumulate due to tidal currents, or are blown at the surface towards the shore, they can also appear as brown scum or creamy foam. You should avoid paddling or swimming in this because sometimes the tentacles from jellyfish can be mixed into the foam as well. 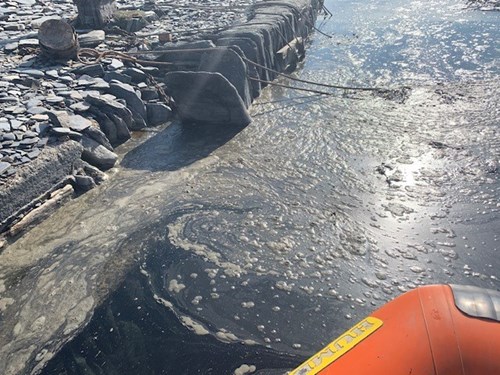 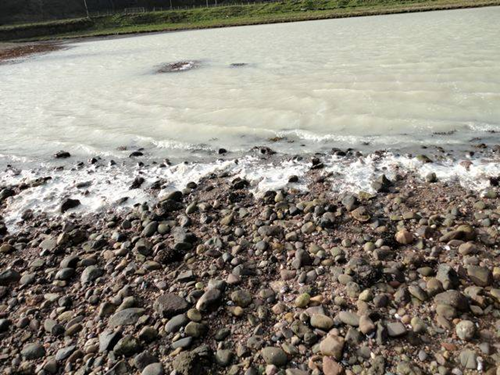 When waves or ripples from a boat's wake appear to glow. This is only visible at night.

Some types of tiny marine organisms produce a flash of light when they are disturbed. Individually this would not be noticed, but when a significant number are present then the sea can seem to glow, particularly where waves are breaking, or where the water is disturbed, for example by a boat’s wake. Many of the species that produce bioluminescence can also irritate the skin or cause illness if ingested. Be wary if you spot dead fish or other marine organisms amongst the algae. This could be because they are a toxic species, or it could be a result of the algae dying and decomposing. (see Anoxic Kills below) 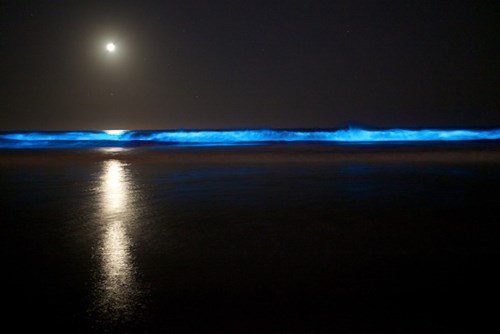 Dead worms, crabs and other sea creatures washed up on the beach

When a bloom of algae that floats in water dies, it loses its buoyancy and sinks to the seabed. Here, bacteria begin to break down the remnants of the algae and this process uses up oxygen. In calm weather or shallow water, this process can use up all the oxygen in seabed sediments. Animals that live in burrows in the seabed are sometimes trapped by this and die from being smothered or suffocated. The dead animals remain in their burrows until a period of rougher seas dislodges them and then they can be washed up on the shoreline. 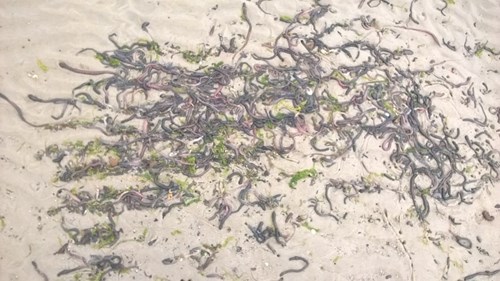 Sometimes coastal water can appear red in colour, as if it had been dyed.

When algae grow and multiply they can become so abundant that they change the colour of sea water. Sometimes this can be a vivid red, but other colours are possible depending on the species that is present.

As the name suggests, the concentrating action of the tide against the shoreline causes these very dense concentrations of algae which can change the colour of the sea. 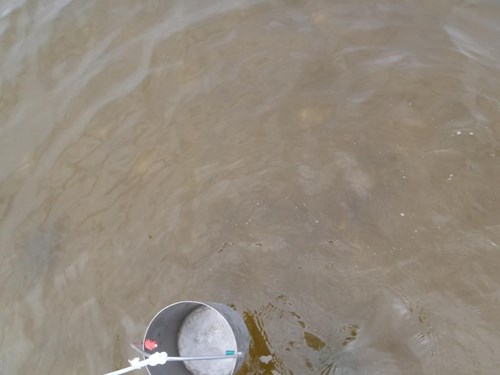 Pollen deposits (a yellow coating on rocks and sand)

This can look like spilled paint or some other material that has come ashore and covered the rocks or beach.

Trees can produce a lot of pollen, at any time between January and May. If there are a lot of trees of the same species growing together, close to the sea, then they will all produce pollen together. An early warm spell of weather can mean a large amount of pollen being released at one time.

If this is accompanied by light offshore winds, then pollen that falls onto water can form a floating mat which is usually yellow in colour, and which will eventually be deposited on rocks on the foreshore. This can look like paint, or a scum left by pollution, however it is completely natural and harmless. 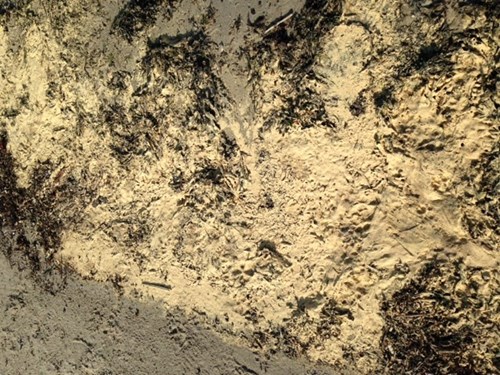 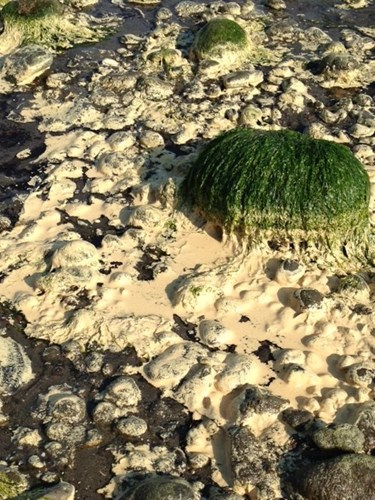 Oil on water can be thick lumps that look like tar, or it can be a thick liqud or be a lighter material that floats on the surface as a sheen.

It depends on the source of the oil, and whether it is crude oil, fuel oil from ships or lighter fuels such as petrol or diesel. It is the heavy oil used to power ships engines can resemble tar when it reaches shore.

Oil can cause significant damage to wildlife, so if a spill is spotted, or if it is a regular occurrence in one location, then your environmental regulator should be informed. 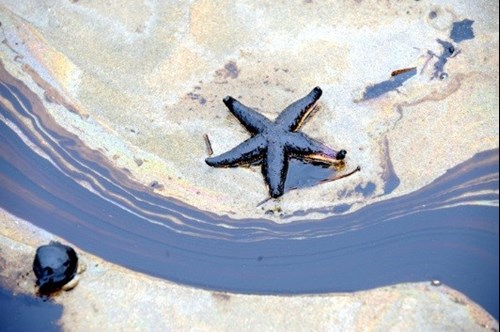 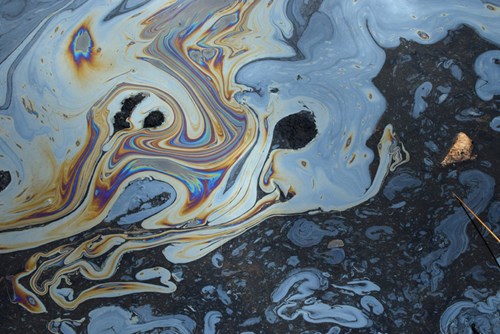 Bathing beaches are regularly checked for their water quality. You can find the bathing water quality of particular beaches from your environmental regulator. When spills or leaks cause pollution it should be reported.

Vessels emptying sewage tanks at sea, or untreated sewage being discharged from onshore dwellings can be the cause.

Also, during sudden and very heavy rainfall events the sewer system can become overwhelmed. To prevent the sewage backing up, leading to sewage flooding streets and homes, the water companies will release the excess untreated sewage into the sea. This can be seen on the coast when it is washed up onto the foreshore.

Most will break down eventually and disappear, however, if the wrong things have been flushed down toilets or washed down sinks, such as cotton buds, condoms and sanitary products made of plastic, then these can remain on the foreshore. 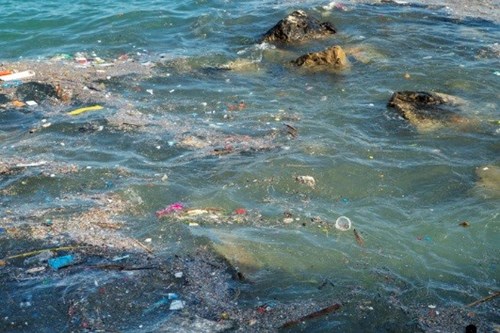 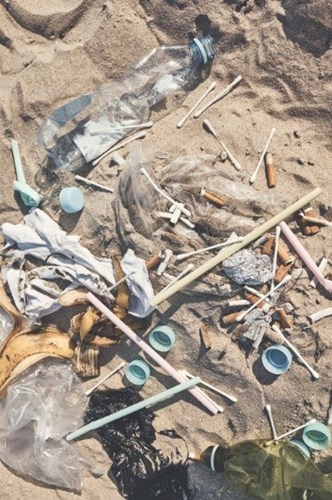 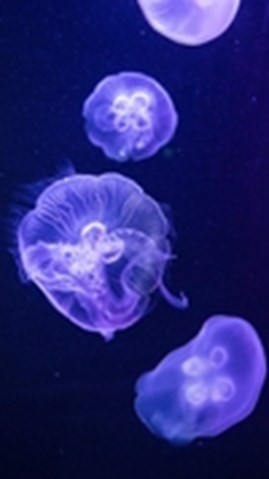 Visitors to the seaside sometimes come across, and often report, seeing large numbers of jellyfish. Sometimes these jellyfish swarms are washed up onto beaches.

These events, when huge numbers of jellyfish are seen at the seaside, have been recorded for centuries, so are not a new phenomenon. There is some concern that these events are becoming more common, and researchers are trying to understand what causes these large swarms of jelly fish to appear.

There are a few possible explanations.

When jelly fish are very young, they are like plankton floating in the sea. At this point they are often eaten by fish.  If fishing boats remove these fish, then the jellyfish numbers are likely to grow. Overfishing can therefore lead to jellyfish swarms.

More nutrients in the water:

Runoff from the land, and sewage discharges from villages and towns carry nutrients into the sea. This can provide nourishment for the small organisms on which jellyfish feed. More food can boost jellyfish numbers. Also, when the algae that jellyfish eat grow in large numbers it reduces the oxygen levels in the water. Jelly fish do well in these low oxygen conditions, while other fish struggle.

It has been shown that in the Irish Sea an increase in jellyfish was linked directly to an increase in the sea surface temperature. When this study was carried out there was also overfishing, so both factors might be contributing to the rise in jelly fish numbers.

The increased reports of jelly fish numbers might be due to more people taking part in water activities and therefore spotting them. There might also be an apparent increase because newspapers make a big story out of something that was always common, but not reported very often.

What are the impacts of jelly fish swarms?

If a jelly fish swarm is seen off a beach where the public goes to swim, then it is likely put a lot of people off. This is likely to be a short-term problem as tides and currents will likely move most of the swarm away.

A significant problem is jelly fish affecting the salmon in fish farms. Large swarms can kill large numbers of caged fish and cause significant losses to the fish farm.

If you spot a jelly fish swarm..

Avoid the swarm, and let others know.  Although most jelly fish in the waters around our coasts are harmless, there are sometimes reports of the species that do have nasty stings.

At present there is no monitoring system in place, but if swarms become more common then this may be introduced.