The John Lawrie Group began as a scrap metal merchant in Aberdeen during the 1930’s and has since grown into one of Scotland’s premier oil and gas decommissioning firms. The company has around sixty employees and conducts a variety of decommissioning work and component reuse activities across Scotland, the UK and Europe. 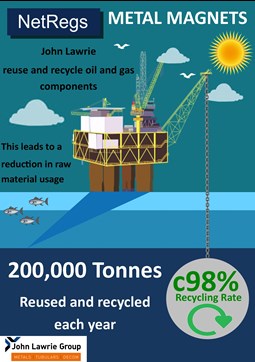 Minimising environmental impact is a priority for the group. Currently, circa 98% of the material they decommission is recycled or reused. The firm deals with around 200,000 tonnes of material every year, servicing the decommissioning needs of companies such as Maersk, Centrica and Transocean along with many others. Ray Grant, the environmental director at John Lawrie says that environmental concerns underpin everything that the company does; “We try to achieve good environmental objectives for our clients which means that we, ourselves, must set high standards”

Decommissioning is regarded as an emerging industry though, as Ray explains, that is not the case “We’ve been decommissioning for years, we just referred to it as ‘scrapping’ in the past”. While scrap metal and oil decommissioning fall under separate legislation, the overall objective is the same - reuse and recycle components whilst minimising the environmental impact.

John Lawrie Decom have developed some novel approaches to the issue of what to do with all the material they decommission. Rather than deem it waste and then scrap it, much of the material they receive is resized and reused. A key area John Lawrie focuses on is metal tubulars - heavy duty steel pipe - which is used widely in the oil and gas industry. The redundant tubulars are cut to specified sizes at their state-of-the-art facilities in Montrose and sold to construction firms who use them for piling, an essential part of building work. The company also reuses metal chain links and wire rope, supplying the aquaculture industry with a solution for weighing down their nets. In these cases, the company actually created the market for these products which financially benefits both John Lawrie Group and their many clients due to higher resale values over recycling.

Whenever possible, John Lawrie doesn’t recycle a material unless it is beyond repair, preferring to find a way to reuse it. For material that does need to be scrapped, the group invested in a large metal shear which is capable of crushing whole train carriages in one go. This means that they no longer have to cut material and feed it into a smaller machine, thereby reducing the amount of high temperature gas cutting by around 70% and generating huge savings in time and energy, not to mention significant reductions in emissions to atmosphere.

In some cases, material is brought in which contains naturally occurring radioactive material (NORM). This can be a problem as it needs treated in a specific way under strict licencing conditions. To deal with this John Lawrie set up a NORM decontamination facility in Aberdeen to clean up the decommissioned equipment. Once decontaminated, they can then safely reuse the metals. The facility is cleverly designed to produce zero emissions. The only waste product from it is the NORM itself which is safely disposed of according to SEPA regulations. All other material is recycled and reused.

The company is not just about servicing the complex needs of the oil and gas industry. In one case, after recovering around 500 tonnes of concrete mattresses from a subsea oil pipeline they gave the material to a local farm to firm up some soft farmland. This saved all parties involved time and money whilst also reducing the environmental impact as concrete recycling is an energetically costly process.

Oil and gas decommissioning is often viewed as an unclean and polluting industry but this is not necessarily the case. This example clearly shows that with some novel ideas it is possible to operate a more successful business by reusing so-called “waste” material in other industries. It is a clear illustration of how being more environmentally aware can lead to being a more sustainable and profitable company.