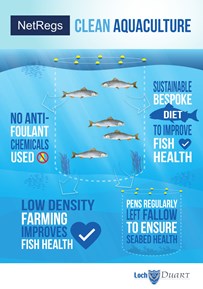 Loch Duart are a small aquaculture company located in the far North West of Scotland. The company has won many environmental accolades and has been keen to promote more sustainable aquaculture since its inception in 1999. This is very important to the company as Technical Manager Sonja Brown explains, “Environmental considerations are central to everything the company does. We aim to produce quality Scottish salmon in a way that is respectful to the animals, the environment and the people involved.”

Loch Duart not only complies with environmental regulations and accreditations such as ISO 14001, they pushed for the RSPCA to establish a scheme for salmon welfare. The RSPCA Assurance scheme, originally named “Freedom Food”, lays down strict codes of practice for the aquaculture industry. Loch Duart was the first fish farm to be approved by this scheme, which is now widely observed across the Scottish salmon sector.

The scheme lays down regulations on fish density, to conform a farm must have not have more than 15kg of fish per cubic metre of water, a figure Loch Duart often operates below. Industry regulation also sets out restrictions on leaving sites fallow (empty) in order to reduce environmental impact. 6 weeks is the minimum fallow time which Sonja explains Loch Duart “Exceeds in all circumstances”, with the shortest fallow on any one of the company’s farms being 5 months.

In line with their environmental commitment the company uses no anti-fouling chemicals on the nets in which the salmon are reared, no antibiotics for their salmon and no growth enhancers. The lack of chemical usage means that the seabed around the sites remains clean and the company aims for their farms to exist as part of the environment, rather than an intrusion. Loch Duart also takes a welfare and environment oriented approach to the diet of their salmon. Working with their feed supplier they created a bespoke diet for their fish, based around capelin, which is both a natural part of the North Atlantic salmon’s diet and a well-regulated fishery. Capelin are caught for their roe (eggs) for human consumption, and Loch Duart use what is essentially a by-product from this fishery to create a high-quality diet for their salmon. Not only does this reduce environmental impact significantly, it improves the health of animals and people as Sonja explains, “When you feed salmon in this way they are much healthier, much closer to a wild fish and that makes it healthier for consumers as well”. By doing this Loch Duart meet their own principles of respect for animals, the environment and people.

As with any fish farm, sea lice are an essential consideration. Loch Duart, with guidance from SEPA, have set up a dedicated hatchery where they rear cleaner fish which eat sea lice as a form of biological parasite control, resulting in healthier fish and a healthier environment. They also use lice filtration systems and are constantly evolving their farming practices to minimise potential impacts from sea lice.